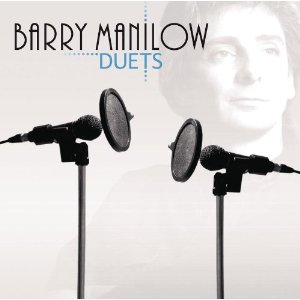 Barry Manilow released a compilation of his favorite duets yesterday.  I was thrilled to find out that he included Islands In The Stream that I produced with him and features Reba McEntire.  The session with Barry and Reba was a real highlight of making the 80’s record and I […]

Barry has released the first song from his upcoming record.  The song is ‘Bring On Tomorrow.’  It was really thrilling to get to work on this classic Manilow type ballad.  While it was fun producing covers with Barry on the 70’s and 80’s albums as well at ‘In The Swing of Christmas,’ I had always hoped to be able to work on a new original […]

It’s been a crazy busy week.  I’m gearing up to start a couple new records that I’ll post about as they get underway.

Mijares’ Vivir Así Volumen II is still right in the middle of the top ten.  Today marks our 6th week on the charts, right up there with Miguel Bosé, Juan Gabriel, Thalia and Camila.  Not bad company!

Ron Dante was over today. We finished up another track for Davy Jones. It’s fantastic and really shows off Davy’s personality! Ron and I also co-produced a version of “That’s How You Know” from Disney’s “Enchanted” for him. It’s part of a new collection called “Disney’s Happily Ever After” that was released on April 06, 2010. […]