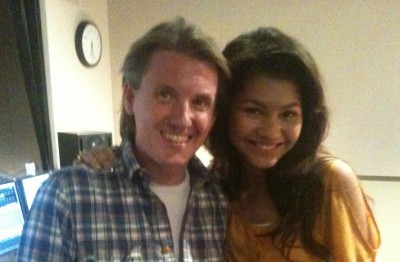 I was asked to produce a song for Zendaya from the Disney Channel’s ‘Shake It Up.’ The song will appear both in the TV special and as a single.  Zendaya was a blast to work with and her family is fantastic.  My daughter is out of her mind that I’m working with one of her favs!  (I remind her of it every time I have to get on her case to practice her piano!)

The song should debut on Radio Disney and the Disney Channel in late October or early November.  I believe the show airs on the Disney Channel on Nov 19.  The song-writers are my friends Bendan Milburn and Valerie Vagoda who have written for the other Tink films as well.  The song is called Dig Down Deeper.  Be on the lookout!